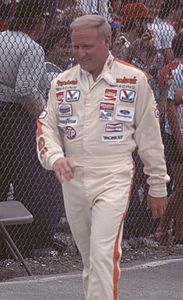 Who is Cale Yarborough?

William Caleb "Cale" Yarborough, is a farmer, businessman and former NASCAR Winston Cup Series driver and owner. He is one of only two drivers in NASCAR history to win three consecutive championships. He was the second NASCAR driver to appear on the cover of Sports Illustrated.

His 83 wins places him at number six on the all-time NASCAR winner's list. His 14.82% winning percentage is the ninth best all-time and third among those with 500 or more starts. Yarborough won the Daytona 500 four times; his first win coming in 1968 for the Wood Brothers, the second in 1977 for Junior Johnson, and back-to-back wins in 1983 and 1984. In 1984, he became the first driver to qualify for the Daytona 500 with a top speed of more than 200 miles per hour. Yarborough is a three time National Motorsports Press Association Driver of the Year.

Discuss this Cale Yarborough biography with the community: