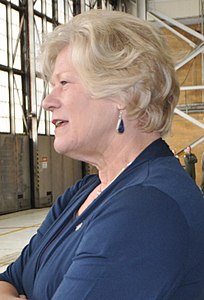 Who is Carol Molnau?

Carol Molnau was the 46th Lieutenant Governor of Minnesota. She formerly served as head of the Minnesota Department of Transportation. She is known for her opposition to state funding of the mass transit systems of the Minneapolis–Saint Paul metropolitan area.

Born in Carver County, Minnesota, she was elected as a member of the Minnesota House of Representatives in 1992 and served five terms. Molnau announced she would not run for re-election after she sold her farm to developers and would no longer be living in the area she represented. She joined the Pawlenty ticket shortly thereafter, and was elected Lieutenant Governor in 2002.

Discuss this Carol Molnau biography with the community: