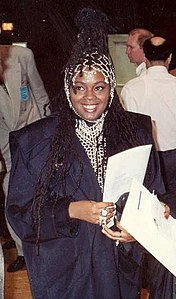 Who is Caron Wheeler?

Caron Wheeler is a British recording artist who gained fame by writing and singing the lead vocals on the two biggest hits for Soul II Soul, "Keep on Movin'" and "Back to Life". She also was a backing vocalist for Elvis Costello in 1983, The Special AKA in 1984 and Howard Jones in 1985. She also provided backing vocals for a track on Erasure's album, The Innocents in 1988. She was a member of the female trio Afrodiziak.

Discuss this Caron Wheeler biography with the community: