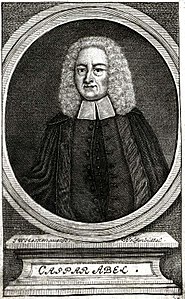 Who was Caspar Abel?

Caspar Abel was a German theologian, historian and poet.

Abel was born in Hindenburg in der Altmark, the son of a preacher, and gained his theological education in Braunschweig and Helmstedt. In 1696 he became rector in Osterburg, in 1698 at the Johannisschule in Halberstadt. In 1718 he became preacher in Westdorf near Aschersleben where he died in 1763.

Note: From 1748 to 1764 he was assisted by Johann Gottfried Bürger, the father of poet Gottfried August Bürger.

Discuss this Caspar Abel biography with the community: