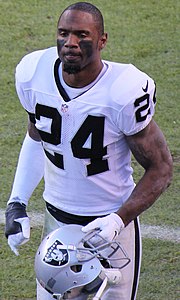 Who is Charles Woodson?

Charles Woodson is an American football safety for the Oakland Raiders of the National Football League. He played college football for the University of Michigan, and led the Michigan Wolverines to a national championship in 1997. Woodson, a "two-way player" who played both offense and defense, won the Heisman Trophy in the same year, becoming the first and, so far, only player to win the award as a defensive player.

Woodson was selected by the Oakland Raiders with the fourth pick in the first round of the 1998 NFL Draft. In his first season with Oakland, Woodson was selected as the NFL Defensive Rookie of the Year by the Associated Press. He was named to the Pro Bowl and earned All-Pro recognition three consecutive times. In a memorable 2002 AFC playoff match against the New England Patriots, Woodson seemed to have clinched the game by forcing a fumble by quarterback Tom Brady, but the ruling was controversially overturned. Woodson later battled several nagging injuries in consecutive seasons in Oakland, leading to his departure and becoming a free agent after the 2005 NFL season.

Discuss this Charles Woodson biography with the community: