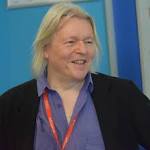 Who is Christopher Hampton?

Christopher James Hampton, CBE, FRSL is a British playwright, screen writer and film director. He is best known for his play based on the novel Les Liaisons dangereuses and the film version Dangerous Liaisons and also more recently for writing the nominated screenplay for the film adaptation of Ian McEwan's Atonement.

Discuss this Christopher Hampton biography with the community: