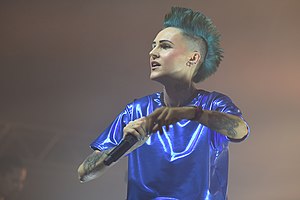 Agnieszka Chylińska is a Polish rock singer and columnist.

From 1994 to 2003, Chylińska was the vocalist with Polish rock band O.N.A.. She has also been one of the judges in the Polish edition of the Got Talent franchise Mam talent!. She founded a band called Chylińska, which released the album Winna in 2004. She released her first solo album, Modern Rocking, in 2009.

Discuss this Agnieszka Chylińska biography with the community: