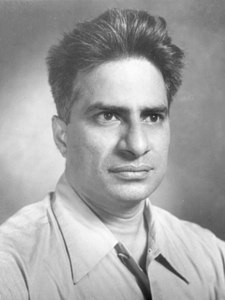 Damodar Dharmananda Kosambi was an Indian mathematician, statistician, Marxist historian, and polymath who contributed to genetics by introducing Kosambi's map function. He is well known for his work in numismatics and for compiling critical editions of ancient Sanskrit texts. His father, Dharmananda Damodar Kosambi, had studied ancient Indian texts with a particular emphasis on Buddhism and its literature in the Pali language. Damodar Kosambi emulated him by developing a keen interest in his country's ancient history. Kosambi was also a Marxist historian specialising in ancient India who employed the historical materialist approach in his work. He is described as "the patriarch of the Marxist school of Indian historiography". Kosambi was critical of the policies of then prime minister Jawaharlal Nehru, which, according to him, promoted capitalism in the guise of democratic socialism. He was an enthusiast of the Chinese revolution and its ideals, and, in addition, a leading activist in the World Peace Movement. In the opinion of the historian Irfan Habib, "D. D. Kosambi and R.S. Sharma, together with Daniel Thorner, brought peasants into the study of Indian history for the first time."

Discuss this D. D. Kosambi biography with the community: