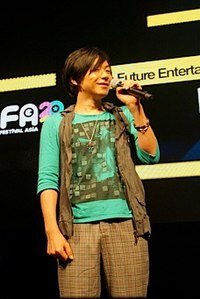 Who is Daisuke Kishio?

Daisuke Kishio is a Japanese voice actor. He is a member of Horipro. Kishio changed his given name from 大輔 to だいすけ on June 1, 2007 with the pronunciation and romanization remaining the same.

Discuss this Daisuke Kishio biography with the community: