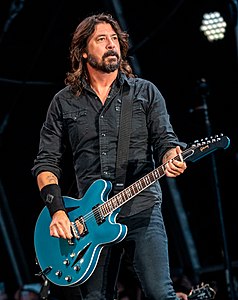 Who is Dave Grohl?

David Eric "Dave" Grohl is an American rock musician, multi-instrumentalist, singer-songwriter, and film director, who is the lead vocalist, guitarist, main songwriter and founder of the band Foo Fighters. Prior to Foo Fighters, Grohl was the drummer for the grunge band Nirvana.

He is also the drummer and co-founder of the rock supergroup Them Crooked Vultures. Grohl has additionally written all the music and performed all the instruments for his short-lived side projects Late! and Probot, as well as being involved with Queens of the Stone Age numerous times throughout the past decade.

Discuss this Dave Grohl biography with the community: