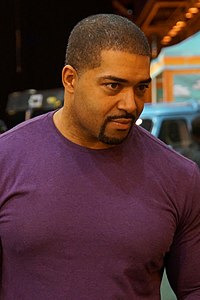 Who is David Otunga?

David Daniel Otunga, Sr. is an American professional wrestler, lawyer, and actor currently signed with WWE. He is a two-time WWE Tag Team Champion, having one reign each with Michael McGillicutty and John Cena. He was the runner-up on the first season of NXT. Otunga was also the last original member of The Nexus and The New Nexus.

Discuss this David Otunga biography with the community: