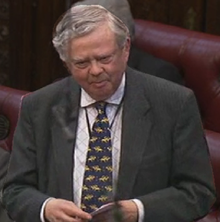 Who is David Williamson, Baron Williamson of Horton?

David Francis Williamson, Baron Williamson of Horton GCMG, CB, PC was a senior British and European civil servant and is an active member of the House of Lords.

Williamson was educated at Tonbridge School and Exeter College, Oxford. He served in the Royal Signals 1956-58 as his national service. He married Patricia Smith in 1961; they had two sons.

He began his civil service career in 1958 at the Ministry of Agriculture, Fisheries and Food, becoming Principal Private Secretary to the minister in 1967. He was Deputy Director-General for Agriculture in the European Commission from 1977 to 1983 and Secretary-General of the European Commission from 1987 to 1997. From 1983 until 1987, Williamson had returned to the United Kingdom to serve as Deputy Secretary and head the European Secretariat in the Cabinet Office.

As well as the honours of Companion of the Bath in 1984 and the Knights Grand Cross of St Michael and St George in 1998, Williamson was awarded the Knight Commander's Cross of the Bundesverdienstkreuz by Germany, the Commander Grand Cross of the Royal Order of the Polar Star by Sweden and made Commander Légion d'honneur by France. He was also sworn of the Privy Council in April 2007.

Discuss this David Williamson, Baron Williamson of Horton biography with the community: