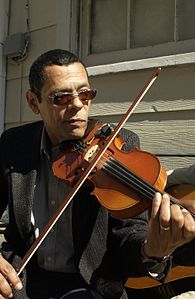 D'Jalma Garnier III is a musician and composer best known for Creole and Cajun fiddle and "outside" musical compositions and collaborations with other artists.

His musical heritage descends from the Camelia Brass Band in New Orleans led by his grandfather, D'Jalma Thomas Garnier, a legendary early jazz player noted on the Preservation Hall roster in the New Orleans French Quarter and who was a trumpet player, pianist and violinist said to have taught Louis Armstrong at the New Orleans Boys Home for Colored Waifs. D'Jalma Garnier, the fiddler, composer, guitarist, and "pedestrian scholar" of Louisiana Creole fame, is the older brother of Tony Garnier, born 1956, Bob Dylan's band leader and bass player for the Neverending Tour Band since 1989. The two brothers are the only descendants of Papa Garnier to become professional musicians in the legacy of this significant New Orleans musical family.

D'Jalma Garnier has been the subject and contributor of many articles and documentaries about Louisiana Creole music. He plays fiddle and guitar, and has performed and recorded with many leading Creole musicians. His study of Creole fiddle playing was advanced as the result of a two-year Texas Folklife Resources Grant to study and perform with the NEA National Heritage Award winner Canray Fontenot. D'Jalma has taught this material repeatedly at the Augusta Folklife Heritage Camp in North Carolina, for Louisiana Folk Roots in Lafayette, and in other workshops at home and abroad.

Discuss this D'Jalma Garnier biography with the community: