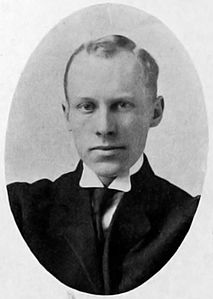 Who was Earl J. Glade?

Glade was born in Ogden, Utah Territory. A Latter-day Saint, he served as a missionary for The Church of Jesus Christ of Latter-day Saints in Germany from 1904 to 1907; during some of this time he was the president of the Breslau Conference. Glade married Sarah Elizabeth Rasband and they had seven children.

Glade studied at Brigham Young University where Christen Jensen was one of his professors. He also studied at Rochester Business Institute and later pursued graduate studies at the University of Chicago. He was the head of the business program at BYU for five years. He later was a professor of business at the University of Utah. From 1925 to 1939 Glade was the head of KSL. Glade was one of the principal people behind the starting of the program Music and the Spoken Word, for which he produced the first broadcast.

Glade was first elected mayor of Salt Lake City in 1944. While mayor, Glade was closely connected with the Little Dell Dam project to lessen flooding in the city.

Glade also served for a time on the General Board of the Deseret Sunday School Union. Glade unsuccessfully ran for governor of Utah in 1952, losing to J. Bracken Lee.

Discuss this Earl J. Glade biography with the community: