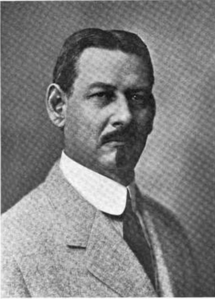 Who was Edville Gerhardt Abbott?

Edville Gerhardt Abbott was an American orthopedic surgeon and orthotist. He was born in Hancock, Maine, and educated at Bowdoin College.

He was well-known for his non-blood method of treatment of lateral curvature of the spine. In 1913 he successfully demonstrated results of his method at orthopedic congress in Berlin, Germany, in England and on the Continent. There he was called "Genius of orthopedics" for his new successful scoliosis treatment. And he made a first in world plastic modern scoliosis brace from celluloid at 1917. He was professor of orthopædics at Bowdoin College and was connected with the Maine General Hospital, the Children's Hospital, etc. He practiced medicine in Portland, Maine. His Children's Hospital, 68 High Street was listed on the National Register of Historic Places March 7, 2012. According to news archives, Drs. Edville Abbott and Harold A. Pingree and Frank W. Lamb founded the children's hospital for crippled children together in 1908. It closed in 1948, with most of the 56 patients at the time being transferred to Maine General Hospital, which was later renamed the Maine Medical Center.

Abbott, second child of Alonzo and Maria B.

Discuss this Edville Gerhardt Abbott biography with the community: