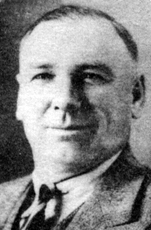 Who was Edward LeRoy Bowerman?

Edward LeRoy Bowerman was a Canadian politician and farmer. He was elected to the Canadian House of Commons in the federal election, 1944 election as a Member of the Co-operative Commonwealth Federation for the electoral district of Prince Albert by defeating then Canadian Prime Minister William Lyon Mackenzie King in a huge upset, the last of four times that King was defeated in Canadian politics. Bowerman was defeated in the 1949 election. In honor of Bowerman's tireless service to the provincial government of Saskatchewan, the Parliament named a lake after him in the northern part of the province in 1972.

Bowerman's son, George Reginald Anderson Bowerman, was an MLA for Shellbrook from 1967–1982 and member of Premier Allan Blakeney's cabinet from 1971–1982, holding various ministerial positions during the period. Ted was born on the family farm in Shellbrook, SK, in 1930, and died in a car accident on December 20, 2007.

Discuss this Edward LeRoy Bowerman biography with the community: