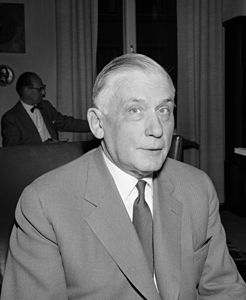 Edwin Johannes Hildegard Linkomies was Prime Minister of Finland from March 1943 to August 1944, and one of the seven politicians sentenced to five and a half years in prison as allegedly responsible for the Continuation War, on the demand of the Soviet Union. Linkomies was a prominent fennoman academic, pro-rector of the University of Helsinki 1932 to 1943, rector 1956 to 1962, and the government's Chancellor of the University from 1962 until his death.

Linkomies was born as Edwin Flinck in southeastern Finland's Viipuri, the son of a Finland-Swedish officer who died soon after Edwin's birth, but Edwin grew up in western Finland at Rauma, north of Turku, in a purely Finnish-speaking region of Finland. He had a quick and splendid career in academia: He graduated at age nineteen, wrote his dissertation at 22 at Finland's university, where seven years later he was appointed professor and head of the department of Latin literature. Meanwhile he had continued his research in Germany, at Leipzig and the Halle.

Discuss this Edwin Linkomies biography with the community: