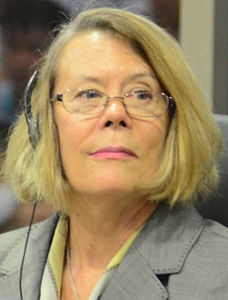 Who is Elizabeth Becker?

Elizabeth Becker is an award-winning author and journalist who covered national and international affairs as a New York Times correspondent and was a member of the staff that won the 2002 Pulitzer Prize for Public Service. She was the Senior Foreign Editor of National Public Radio where she received two DuPont-Columbia Awards as executive producer for reporting of South Africa’s first democratic elections and the Rwanda genocide. She began her career as a war correspondent for The Washington Post covering Cambodia. She was one of two American journalists allowed by the Khmer Rouge to return to Democratic Kampuchea in 1978 where she interviewed Pol Pot. She is the author of When the War Was Over, a modern history of Cambodia and the Khmer Rouge, for which she won a Robert F. Kennedy book citation. The FInancial Times said of her book that "Becker writes history as history should be written." Rithy Panh made the documentary film "Bophana" based on an excerpt of the book. She was the 2008 Edelman fellow at Harvard’s Joan Shorenstein Center on the Press, Politics and Public Policy at the Kennedy School of Government. She is the author of "Overbooked: The Exploding Business of Travel and Tourism," which was named one of Amazon's top non-fiction books of the year. She is also the author of "America's Vietnam War: A Narrative History for young adults" and "Bophana," which is only available in Cambodia. Her early investigation of the Khmer Rouge was detailed in "A Problem from Hell; America in the Age of Genocide" by Samantha Power.

Discuss this Elizabeth Becker biography with the community: