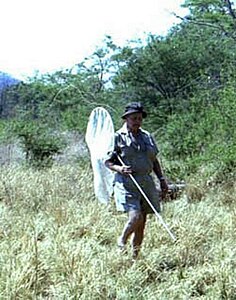 Elliot Charles Gordon Pinhey was an entomologist who worked in Africa and specialised in African Lepidoptera and Odonata. Born of British parents on holiday in Belgium, Pinhey made major contributions in entomology to the knowledge of butterflies, moths and dragonflies. Elliot Pinhey's interest in natural history first developed during his early education in England.

He obtained a BSc at the University of London in mathematics, physics, chemistry and biology in 1934, after which he joined the teaching profession as a Science Master. His chronically poor health led to his doctor's suggesting he emigrate to a more congenial climate. Accordingly he arrived in Southern Rhodesia in 1939 and took up a teaching post as Science Master. A stint with the Royal Air Force Meteorology department followed, and on his release he joined the Agriculture Department as economic entomologist, working on Acarina, Coccoidea and Chrysomelidae. His interest in Odonata surfaced in 1947 through J.A. Whelan who had joined his department, and Colonel F.C. Fraser who encouraged him.

Discuss this Elliot Pinhey biography with the community: