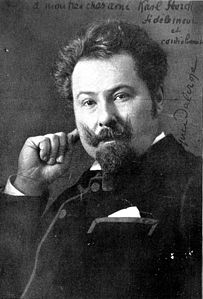 Who was Émile Jaques-Dalcroze?

Émile Jaques-Dalcroze was a Swiss composer, musician and music educator who developed eurhythmics, a method of learning and experiencing music through movement.

The Dalcroze Method involves teaching musical concepts through movement. A variety of movement analogues is used for musical concepts, to develop an integrated and natural feel for musical expression. Turning the body into a well-tuned musical instrument, Dalcroze felt, was the best path for generating a solid, vibrant musical foundation. The Dalcroze Method consists of three equally-important elements: eurhythmics, solfège, and improvisation. Together, according to Dalcroze, they comprise the essential musicianship training of a complete musician. In an ideal approach, elements from each subject coalesce, resulting in an approach to teaching rooted in creativity and movement.

Dalcroze began his career as a pedagogue at the Geneva Conservatory in 1892, where he taught harmony and solfège. It was in his solfège courses that he began testing many of his influential and revolutionary pedagogical ideas. Between 1903 and 1910, Dalcroze had begun giving public presentations of his method. In 1910, with the help of German industrialist Wolf Dohrn, Dalcroze founded a school at Hellerau, outside Dresden, dedicated to the teaching of his method. In Hellerau were taught a lot of people, among them Prince Serge Wolkonsky, Vera Alvang, Valeria Cratina, Jelle Troelstra, Inga and Ragna Jacobi, Albert Jeanneret, Mariam Ramberg, and Placido de Montelio. With the outbreak of World War I in 1914, the school was abandoned. After the Second World War, his ideas were taken up as "music and movement" in British schools.

Discuss this Émile Jaques-Dalcroze biography with the community: