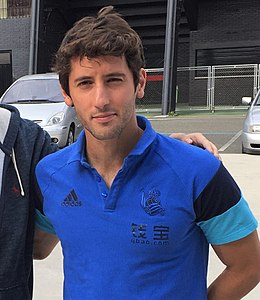 Who is Esteban Granero?

Esteban Félix Granero Molina is a Spanish professional footballer who plays for Real Sociedad on loan from Queens Park Rangers. Known as El Pirata, he can play as a central or an attacking midfielder, his best attributes being passing, technique and shooting.

He emerged through Real Madrid's youth ranks, but made a name for himself in La Liga with Getafe, following which he returned to his previous team, winning two major titles but being sparingly played over the course of three seasons.

Granero represented Spain at under-21 level, appearing in the 2009 European Championship.

Discuss this Esteban Granero biography with the community: