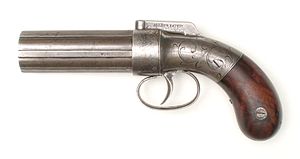 Who was Ethan Allen?

Ethan Allen was a major American arms maker from Massachusetts. He is believed to be unrelated to the revolutionary Ethan Allen. His first firearm, the "Pocket Rifle" was developed in 1836, and his first patent was granted in 1837.

The Pepper-box, known as the "Gun that won the East", was the most common repeating handgun prior to the invention of the revolving cylinder. Its name may have been coined by Samuel Clemens. It was commonly found during the California Gold Rush.

He was a co-inventor, with Thomas P. Wheelock, of the "Allen and Wheelock" single-action revolver, an inexpensive pocket pistol.

Discuss this Ethan Allen biography with the community: