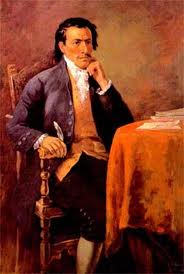 Who was Eugenio Espejo?

Francisco Javier Eugenio de Santa Cruz y Espejo was a medical pioneer, writer and lawyer of mestizo origin in colonial Ecuador. Although he was a notable scientist and writer, he stands out as a polemicist who inspired the separatist movement in Quito. He is regarded as one of the most important figures in colonial Ecuador. He was Quito's first journalist and hygienist. As a journalist he spread enlightened ideas in the Royal Audiencia, and as a hygienist he composed an important treatise about sanitary conditions in colonial Ecuador that included interesting remarks about microorganisms and the spreading of disease.

Espejo was noted in his time for being a satirist. His satirical works, inspired by the philosophy of the Age of Enlightenment, were critical of the lack of education of the Audiencia of Quito, the way the economy was being handled in the Audiencia, the corruption of its authorities, and aspects of its culture in general. Because of these works he was persecuted and finally imprisoned shortly before his death.

Discuss this Eugenio Espejo biography with the community: