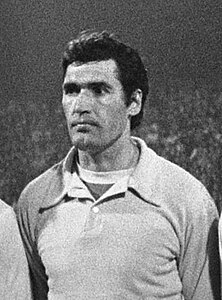 Who was Yevhen Rudakov?

Yevgeniy Vasilievich Rudakov, was a Soviet footballer of Russian origin. In 1971 he was recognized as the Best Ukrainian Player of the Year becoming the first foreigner to be awarded such honors.

A six-time domestic champion of the USSR, Rudakov also helped Dynamo win the USSR Cup twice, the Cup Winners' Cup and the UEFA Super Cup. He also represented the USSR national football team and helped them reach the Euro 1972 finals. In 1971 Rudakov was also chosen the Soviet Footballer of the Year and the best goalkeeper of the USSR in 1969, 1971, and 1972.

At the Olympic Games 1972 he earned four wins and two shutouts. He also won 21 games with the regular senior squad and finished 22 games without allowing any goals. His career goals against average was at 0.69.

After finishing his playing career, he coached few Ukraine-based clubs, but mostly stayed on at Dynamo Kyiv's sport school as a children coach.

Discuss this Yevhen Rudakov biography with the community: