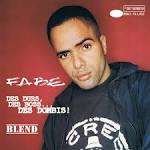 Fabrice "Fabe" is a French rapper from Barbès, a neighborhood of Paris. He is one of the founders of "Scred Connexion", an underground French rap group. He started rapping around 1991 releasing his first work as early as 1995. He is mostly known for his thought-provoking and clever use of lyrics. During the French Riots, he was cited in a petition against seven rap musicians and bands, who were alleged to have incited racism and the riots themselves. The claims were dropped shortly afterwards. He retired from the music scene in 2000 and left to study theology in Quebec.

Discuss this Fabe biography with the community: