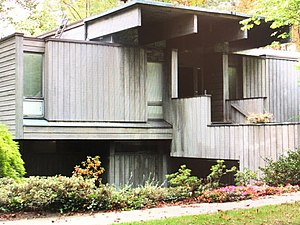 Who was Ferdinand Gottlieb?

He is best known for his interior design of the original Rizzoli International Bookstore on Fifth Avenue in New York City, and for his landmark Saul Victor House in the Riverdale section of New York City, noted in the American Institute of Architects' AIA Guide to New York City as a "formal modernist design in now-grayed redwood siding". When the interior of the building housing the bookstore was razed for an office tower, critic Carter Horsley decried not the loss of the block except that, "If anything was wonderful on the Fifth Avenue portion of the site it was the splendid Rizzoli bookstore in the building . . . and the Rizzoli bookstore was less than two decades old."

Gottlieb is credited with designing the New York, now Horace Mann School for Nursery Years, the headquarters for the now defunct salvage and construction firm Merritt-Chapman & Scott in NY and several other large commercial projects in the New York area including a warehouse for Pirelli tires in Oakland, N.J., along with numerous private residences. The Times quotes from him in 1989, decrying most builders' and designers' alienation from the "grammar" of good design, even when building million dollar mansions: "Unfortunately, a lot of these mansions are done by people who haven't studied traditional architecture very carefully. They use mass-produced windows, incorrect brick and plastic moldings ordered out of a catalogue from South Carolina. It isn't a true piece of traditional architecture, but it gives the impression of wealth."

Discuss this Ferdinand Gottlieb biography with the community: