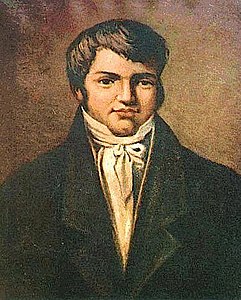 Who was Fra Diavolo?

Fra Diavolo, is the popular name given to Michele Pezza, a famous Neapolitan guerrilla leader who resisted the French occupation of Naples, proving an “inspirational practicioner of popular insurrection”. Pezza figures prominently in folk lore and fiction. He appears in several works of Alexandre Dumas, including The Last Cavalier: Being the Adventures of Count Sainte-hermine in the Age of Napoleon, not published until 2007 and in Washington Irving's short story "The Inn at Terracina".

Discuss this Fra Diavolo biography with the community: