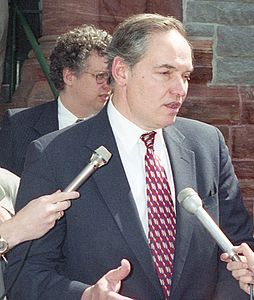 Who is G. Oliver Koppell?

G. Oliver Koppell is a member of the New York City Council from District 11 in the Borough of The Bronx, covering the neighborhoods of Riverdale, Kingsbridge, Woodlawn, Van Cortlandt Village, Norwood, and Bedford Park. He was elected to the Council in 2001, and defeated Ari Hoffnung by a 3 to 1 margin in 2005. On September 15, 2009, Koppell defeated challenger, Tony Perez Casino winning 65% of the vote. Due to term limits, Koppell will leave the City Council on December 31, 2013.

Prior to his term in the City Council, he had been a member of the New York State Assembly in from 1970 to 1994. While in the Assembly, he served as Chairman of the Judiciary Committee, and passed the New York bottle bill. In 1981, Koppell ran for Bronx Borough President, but was defeated in the Democratic primary by the incumbent, Stanley Simon.

In 1993, Koppell was elected by the New York State Legislature to fill the unexpired term of New York State Attorney General Robert Abrams, who resigned. As attorney general, Koppell successfully brought a lawsuit to allow drivers under the age of 25 to obtain rental cars in the State of New York. In 1994, Koppell sought a full term as attorney general, but lost to Judge Karen Burstein in the Democratic Primary. He finished second, ahead of Brooklyn District Attorney Charles "Joe" Hynes and prosecutor Eliot Spitzer. In 1998, he again sought the Democratic nomination for state attorney general. He finished third in the primary, behind Spitzer, who won, and State Sen. Catherine Abate. Koppell finished ahead of Charles Davis, a former staffer for former Gov. Mario Cuomo.

Discuss this G. Oliver Koppell biography with the community: