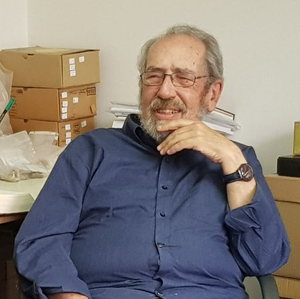 Who is Gabriel Barkay?

Gabriel Barkay is an Israeli archaeologist. Born in 1944 in Hungary, he immigrated to Israel in 1950. He received his PhD in Archaeology from Tel Aviv University in 1985. His dissertation was about LMLK seal impressions on jar handles. He participated in the Lachish excavations with David Ussishkin. His academic areas of interest include the archaeology of Jerusalem, biblical archaeology, burials and burial customs, art, epigraphy, and glyptics in the Iron Age. Dr. Barkay's most famous discoveries are small silver scroll amulets containing the priestly benediction from the Book of Numbers, which he discovered in 1979 at Ketef Hinnom. These amulets contain the oldest surviving biblically-related inscription discovered to date, dating back to 600 BC. He also excavated the Iron Age tombs on the grounds of the École Biblique in the early 1970s.

Barkay frequently appears on the History Channel show The Naked Archaeologist, which is hosted by Simcha Jacobovici.

In 1996, Barkay received the Jerusalem Prize for his life's work as an archaeologist of Jerusalem.

Barkay is currently an external lecturer at Bar Ilan University. In 2005, together with archaeologist Zachi Zweig, Barkay established the Temple Mount Sifting Project, a project funded by the Ir David Foundation and dedicated to recovering archaeological artifacts from 400 truckloads of earth removed from the Temple Mount by the Waqf and Israeli Islamic movement during 1996–2001. The construction included the establishment of an underground mosque at an ancient structure known as "Solomon's Stables", excavating a huge pit as an entrance to the structure, and reducing the platform level at the area north to the entrance. One of the findings of this project is a bulla containing three lines of writing in Hebrew. The project detected artifacts from various periods, but Barkay pointed out the ones from Byzantine times as indicating that the Temple Mount was inhabited in those times.

Discuss this Gabriel Barkay biography with the community: