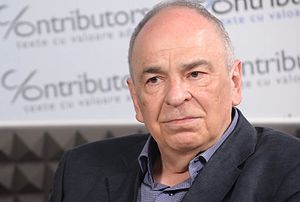 Gabriel Liiceanu is a Romanian philosopher.

He is the manager of Humanitas publishing house since 1990. He has been professor at the University of Bucharest's Faculty of Philosophy since 1992.

He was greatly influenced by his mentor, Constantin Noica, especially during the time spent at Păltiniş. Noica, a Romanian philosopher known abroad as well as in the country, used to take his most valuable students and followers to his small house at Păltiniş, where he would teach them what they afterwards called "not philosophy lessons, but spiritual experiences". Another Noica follower who was invited to Păltiniş was Andrei Pleșu. Liiceanu refers to that experience in his books as the "Păltiniş School" and the term began to be widely accepted and used in Romanian, as well as European, philosophy.

Discuss this Gabriel Liiceanu biography with the community: