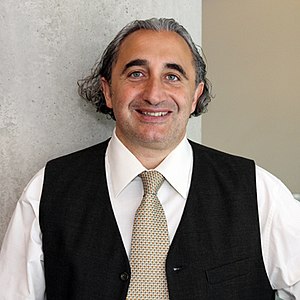 Who is Gad Saad?

Gad Saad was born in 1964 in Beirut, Lebanon. His family emigrated to Montreal, Quebec, Canada in October 1975 to escape the brutality of the Lebanese civil war. Saad is an evolutionary behavioral scientist and Professor of Marketing at the John Molson School of Business. He holds the Concordia University Research Chair in Evolutionary Behavioral Sciences and Darwinian Consumption. He was recently appointed an advisory fellow of the Center for Inquiry. Professor Saad has a blog at Psychology Today titled Homo Consumericus.

For much of the past 15 years, Saad's research program has operated at the intersection of evolutionary psychology and consumer behavior. He is the author of The Evolutionary Bases of Consumption, The Consuming Instinct: What Juicy Burgers, Ferraris, Pornography, and Gift Giving Reveal About Human Nature, and editor of Evolutionary Psychology in the Business Sciences. He has also guest edited a special issue of the journal Futures on possible futures of evolutionary psychology across a wide range of disciplines.

In February 2011, Saad gave a TEDx talk titled The Consuming Instinct in which he discussed his books and several of his evolutionary-based empirical studies. Watch here.

Discuss this Gad Saad biography with the community: