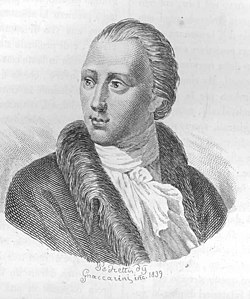 Who was Gaetano Filangieri?

Gaetano Filangieri was an Italian jurist and philosopher.

Filangieri was born in San Sebastiano al Vesuvio, in the province of Naples, Italy. His father, Caesar, prince of Arianiello, intended him for a military career, which he commenced at the early age of seven, but soon abandoned for the study of the law. At the bar his knowledge and eloquence early secured his success, while his defence of a royal decree reforming abuses in the administration of justice gained him the favor of the king, Ferdinand IV of Naples, and his prime minister Bernardo Tanucci, and led to several honorable appointments at court.

The first two books of his great work, La Scienza della legislazione, appeared in 1780. The first book contained an exposition of the rules on which legislation in general ought to proceed, while the second was devoted to economic questions. These two books showed him an ardent reformer, and vehement in denouncing the abuses of his time. He insisted on unlimited free trade, and the abolition of the mediaeval institutions which impeded production and national well-being. Its success was great and immediate not only in Italy, but throughout Europe at large.

Discuss this Gaetano Filangieri biography with the community: