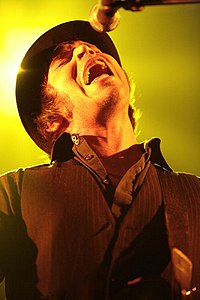 Who is Gaz Coombes?

Gareth Michael "Gaz" Coombes is an English musician and singer-songwriter, best known as the lead vocalist and guitarist of the English alternative rock band, Supergrass. He first entered the music scene aged sixteen as the lead singer of the band The Jennifers which featured Supergrass band mate Danny Goffey. Coombes was noticeable for his large sideburns during the 1990s.

Discuss this Gaz Coombes biography with the community: