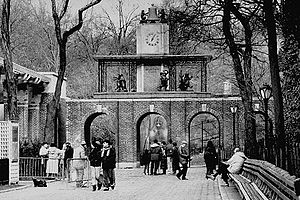 Who was George T. Delacorte, Jr.?

George T. Delacorte, Jr. founded the Dell Publishing Company in 1921. His goal was to entertain readers who were not satisfied with the genteel publications available at the time. The company was one of the largest publishers of books, magazines, and comics during its heyday. His most successful innovation was the puzzle magazine.

In 1962, he donated money to establish the Delacorte Theater in Central Park, New York City. He also donated money for the George Delacorte Musical Clock in the park, a sculpture of Alice in Wonderland, sculptures of The Tempest and Romeo and Juliet, and a fountain in City Hall Plaza.

He died in Manhattan in 1991 at the age of 97, survived by his second wife Valerie Delacorte, two sons, three daughters, 18 grandchildren and 19 great-grandchildren. His siblings included Eugene Tonkonogy.

Discuss this George T. Delacorte, Jr. biography with the community: