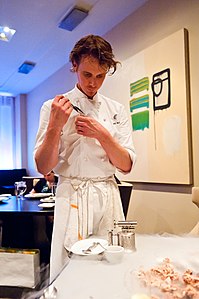 Who is Grant Achatz?

Grant Achatz is an American chef and restaurateur often identified as one of the leaders in molecular gastronomy or progressive cuisine. His Chicago restaurant Alinea has won numerous accolades, and Achatz himself has won numerous awards from prominent culinary institutions and publications including the "Rising Star Chef of the Year Award" for 2003, "Best Chef in the United States" for 2008, and a 2012 "Who's Who Inductee" from the James Beard Foundation.

Discuss this Grant Achatz biography with the community: