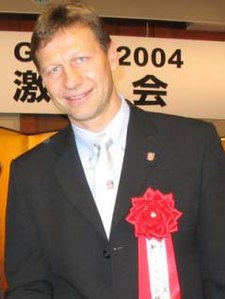 Who is Guido Buchwald?

Guido Ulrich Buchwald is a German former football defender who is currently director of football of Stuttgarter Kickers.

The best game of Buchwald's career was probably the final of the 1990 FIFA World Cup when he effectively marked the skilled footballer, Diego Maradona, earning him the nickname "Diego". He was also part of Germany's disappointing 1994 FIFA World Cup squad.

Discuss this Guido Buchwald biography with the community: