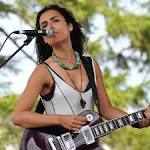 Haale Gafori is a singer, composer, and poet living in New York City. She was born in the Bronx, to Persian parents.

Haale released two five-song EP recordings, Morning and Paratrooper, on January 3, 2007, on the Darya Records imprint, produced by Dougie Bowne. She released the full-length album, "No Ceiling," on March 18, 2008, produced by percussionist Matt Kilmer. On these albums, Haale sings in both English and Persian, her own poetry as well the poetry of poets such as Rumi, Attar, and Forugh Farokhzad. The Boston Globe called "No Ceiling" one of 2008's "most memorable releases." Haale and bandmates Matt Kilmer, John Shannon, and Brent Arnold toured across the United States, Canada and Europe in 2007 and 2008, performing at the Bonnaroo Festival, the David Byrne-curated series at Carnegie Hall, the Mimi Festival in Marseilles France, Memorial Hall at University of Chapel Hill, North Carolina, the NuMoon festival in Rotterdam, and SXSW in Austin.

Haale and Matt Kilmer have continued to collaborate over the years, and have launched a new project called The Mast. Their debut album is called Wild Poppies.

Discuss this Haale biography with the community: