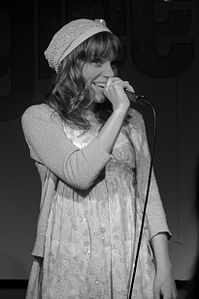 Hafdís Huld Þrastardóttir, known simply as Hafdís Huld, is an Icelandic singer and actress. She began her musical career as a member of the electronic band GusGus in 1995 and left the group in 1999. Hafdís made her solo debut with her 2006 album Dirty Paper Cup.

Discuss this Hafdís Huld biography with the community: