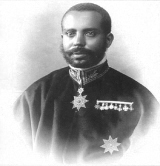 Who was Haile Selassie I?

Haile Selassie I, born Tafari Makonnen Woldemikael, was Ethiopia's regent from 1916 to 1930 and Emperor of Ethiopia from 1930 to 1974. He was the heir to a dynasty that traced its origins by tradition from King Solomon and Queen Makeda, Empress of Axum, known in the Abrahamic tradition as the Queen of Sheba. Haile Selassie is a defining figure in both Ethiopian and African history.

At the League of Nations in 1936, the Emperor condemned the use of chemical weapons by Italy against his people during the Second Italo–Ethiopian War. His internationalist views led to Ethiopia's becoming a charter member of the United Nations, and his political thought and experience in promoting multilateralism and collective security have proved seminal and enduring. His suppression of rebellions among the nobles, as well as what some western critics perceived to be Ethiopia's failure to modernize adequately, earned him criticism among some contemporaries and historians. He has also received criticism from groups such as Human Rights Watch for allegedly ruling in a repressive and undemocratic manner.

Discuss this Haile Selassie I biography with the community: