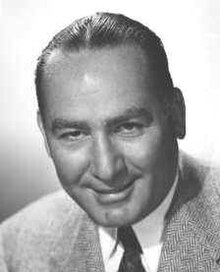 Who was Hal B. Wallis?

Harold Brent "Hal" Wallis was an American film producer. He is best remembered for producing Casablanca, and other films for Warner Bros. featuring such film stars as Bette Davis and Errol Flynn. Later, for a long period, he was connected with Paramount Pictures and oversaw films featuring Dean Martin, Jerry Lewis, Elvis Presley, and John Wayne.

Discuss this Hal B. Wallis biography with the community: