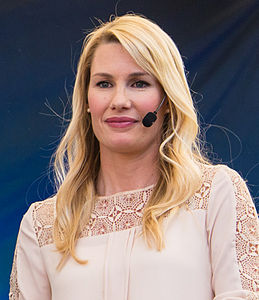 Who is Hanna Marklund?

Hanna Gunilla Marklund is a Swedish former football player. She played as a defender and wore shirt number 4.

Marklund started playing in Varuträsk IF near Skellefteå, where she grew up. She moved on to play in Damallsvenskan with Sunnanå SK. In 2000 she joined Umeå IK, with whom she won Damallsvenskan three years in a row. After the 2004 season she decided to move back to Skellefteå and rejoin Sunnanå SK, where her two sisters Carolina and Mirjam also played. She went on to captain Sunnanå SK.

She made her first appearance in the Swedish national team on August 8, 1997 against Iceland. She became a regular member of the team, winning a total of 118 caps and scoring six international goals.

In November 2005 she won Diamantbollen, an award given the best female player in Sweden each year.

On January 7, 2008, Marklund announced her retirement from both the national team and Sunnanå SK as a result of her pregnancy.

Discuss this Hanna Marklund biography with the community: