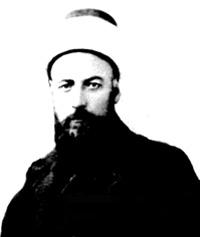 Haji Mirza Hassan Tabrizi, famously known as Hassan Roshdieh, was an Iranian cleric, teacher, politician, and journalist. He introduced some modern teaching methods in Iran, especially in teaching the alphabet. These are still used to some degree in Iran's primary schools.

Hassan Roshdieh was an ethnic Iranian Azerbaijani and began studying as a Twelver Shi'a cleric there, Roshdieh abandoned his plans of going to Najaf to study in religious schools after reading an article about the hardships of education in the Persian language from the newspaper Akhtar. He left for Beirut in 1880 and studied for two years in its Daar ul-Mu'allimeen, and then continued with visiting Istanbul and Egypt. In 1883, he left for Yerevan and founded the first modern school for Muslims there. In his new method of teaching, Roshdieh used the concept of sounds instead of alphabet letters to teach Persian and Azerbaijani Turkish languages. During his four years of managing his school in Yerevan, Roshdieh wrote Vatan Dili in Azerbaijani, which was taught in several schools of the Caucasus as a primer until the October Revolution.