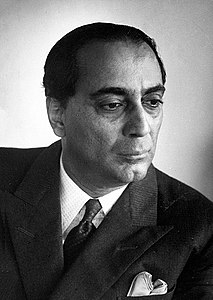 Who was Homi J. Bhabha?

Homi Jehangir Bhabha, FRS was an Indian nuclear physicist, founding director, and professor of physics at the Tata Institute of Fundamental Research. Colloquially known as "father of Indian nuclear programme", Bhabha was the founding director of two well-known research institutions, namely the Tata Institute of Fundamental Research and the Trombay Atomic Energy Establishment; both sites were the cornerstone of Indian development of nuclear weapons which Bhabha also supervised as its director.

Starting his scientific career in nuclear physics from Great Britain, Bhabha returned to India for his annual vacation prior to start of the World War II in September 1939, prompting Bhabha to remain in India, and accepted a post of reader in physics at the Indian Institute of Science in Bangalore, headed by Nobel laureate C.V. Raman. During this time, Bhabha played a key role in convincing the Congress Party's senior leaders, most notable Jawaharlal Nehru who later served as India's first Premier, to start the ambitious nuclear programme. As part of this vision, Bhabha established the Cosmic Ray Research Unit at the institute, began to work on the theory of the movement of point particles, while independently conduct research on nuclear weapons in 1944. In 1945, he established the Tata Institute of Fundamental Research in Bombay, and the Atomic Energy Commission in 1948, serving its first chairman. In 1948, Nehru led the appointment of Bhabha as the director of the nuclear programme and tasked Bhabha to develop the nuclear weapons soon after. In the 1950s, Bhabha represented India in IAEA conferences, and served as President of the United Nations Conference on the Peaceful Uses of Atomic Energy in Geneva, Switzerland in 1955. During this time, he intensified his lobbying for developing the nuclear weapons, and soon after the Sino-Indo war, Bhabha aggressively and publicly began to call for the nuclear weapons.

Discuss this Homi J. Bhabha biography with the community: