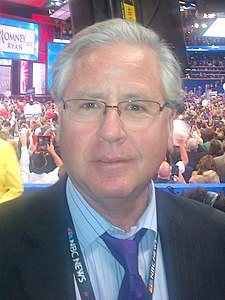 Who is Howard Fineman?

Howard Fineman is an American journalist who is editorial director of the AOL Huffington Post Media Group. Prior to his move to Huffington Post in October 2010, he was Newsweek’s Chief Political Correspondent, Senior Editor and Deputy Washington Bureau Chief. An award-winning writer, Fineman also is an NBC News analyst, contributing reports to the network and its cable affiliate MSNBC. He appears frequently on Hardball with Chris Matthews, The Last Word with Lawrence O'Donnell, and The Rachel Maddow Show. The author of scores of Newsweek cover stories, Fineman’s work has also appeared in The New York Times, The Washington Post, and The New Republic. His “Living Politics” column was posted weekly on Newsweek.com. Fineman authored his first book in 2008, The Thirteen American Arguments: Enduring Debates That Define and Inspire Our Country.

Discuss this Howard Fineman biography with the community: