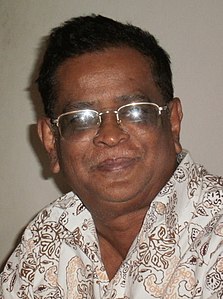 Who was Humayun Ahmed?

Humayun Ahmed was a Bangladeshi author, dramatist, screenwriter, playwright and filmmaker. Dawn referred to him as the cultural legend of Bangladesh. Humayun reached peak of his fame with the publication of his novel Nondito Noroke in 1972, which remains one of his most famous works, winning admiration from literary critics, including Dr. Ahmed Sarif. He wrote over 200 fiction and non-fiction books, all of which were bestsellers in Bangladesh. In recognition to the works of Humayun, Times of India wrote Humayun was a custodian of the Bangladeshi literary culture whose contribution single-handedly shifted the capital of Bengali literature from Kolkata to Dhaka without any war or revolution. Ahmed's writing style was characterized as magic realism. Sunil Gangopadhyay described him as the most popular writer in the Bengali language for a century and according to him, Ahmed was even more popular than Sarat Chandra Chattopadhyay. Ahmed's books have been the top sellers at the Ekushey Book Fair during the 1990s and 2000s.

Discuss this Humayun Ahmed biography with the community: