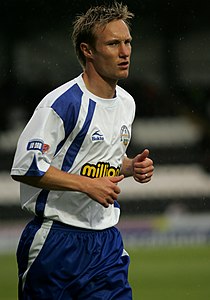 Who is Iain Russell?

Iain Thomas Russell is a Scottish professional footballer currently playing as a striker for Queen of the South in the Scottish First Division.

Russell came through the youth teams at Annan Athletic and Rangers, before making a few appearances for Motherwell. Since leaving Motherwell, Russell has played for Dumbarton, Brechin City, Morton and Alloa Athletic. Russell has been a fans' favourite during his time at Livingston, and has become somewhat of a cult hero among the clubs supporters. A recent online poll saw him voted as the club's third most popular player in their history.

Discuss this Iain Russell biography with the community: