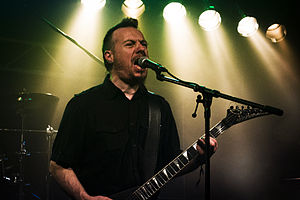 Who is Ian Arkley?

Ian Arkley is a guitarist in the death/doom/gothic metal genre, his current band is the UK gothic doom metal outfit My Silent Wake.

Arkley was briefly a member of the Australian doom outfit Paramaecium, and recorded the album A Time to Mourn with them. Ashen Mortality split in the autumn of 2004, playing their last gig on Halloween of that year. With two of the members in the final line-up of Ashen Mortality, Arkley formed My Silent Wake. MSW recorded a two song demo in mid-2005, and the limited 100 copy run sold out almost immediately, and resulted in a record deal with indie label Bombworks Records. MSW released their first full length album Shadow of Sorrow on Bombworks Records in spring 2006. Drawing on similar influences to Ashen Mortality, My Silent Wake is a more experimental progression for Arkley, with more open soundscape arrangements, but also a heavier aspect to the sound. MSW went on to record a further three albums and a split album with The Drowning. The band are still active.

Discuss this Ian Arkley biography with the community: