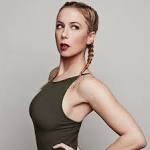 Who is Iliza Shlesinger?

Originally from Dallas, Iliza Shlesinger currently lives in Los Angeles and is the first female and youngest comedian to hold the title of NBC’s Last Comic Standing. Her television credits include having her own half-hour Comedy Central Presents special, Comedy Central’s Live at Gotham, Showtime's Pauly Shore & Friends, E!'s Chelsea Lately, The Soup, and NBC’s Last Call with Carson Daly.

In September, Shlesinger will be the host of the upcoming dating series Excused for CBS. She also currently hosts her own hit web series, The Weakly News, and recently hosted the NBC pilot, That’s So Cute. Her stand up comedy resume includes performing at the coveted Montreal Just for Laughs Comedy Festival, and for our troops in various countries. She can currently be seen headlining at variety of colleges and clubs across the United States.

Discuss this Iliza Shlesinger biography with the community: