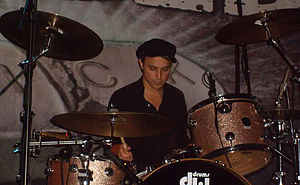 Who is Isaac Carpenter?

Isaac Carpenter is an American drummer, percussionist, producer, audio engineer and session musician. Carpenter is best known as the former drummer for the alternative rock group Gosling as well as its previous incarnation Loudermilk. Currently, Carpenter is the drummer Duff McKagan's Loaded as well as Adam Lambert's live band while previously he has performed and/or recorded with The Exies, Ours, Seaspin, Black Lab, Marion Raven, Tyga and Unified Theory among others.

Discuss this Isaac Carpenter biography with the community: