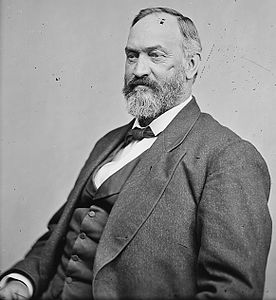 Who was Jacob K. Shafer?

Jacob K. Shafer was a Delegate from Idaho Territory.

Born near Broadway, Virginia, Shafer was graduated from Washington and Lee University, Lexington, Virginia, in 1843. And from the law school of L.P. Thompson in Staunton, Virginia, in 1846. He moved to Stockton, California in 1849, was admitted to the bar in California and practiced law. He served as district attorney of the fifth judicial district of California in 1850. He served as mayor of Stockton in 1852 and as a judge of the San Joaquin County Court from 1853-1862. In 1862 he moved to what later became Idaho Territory.

Shafer was elected as a Democrat to the Forty-first Congress, but was an unsuccessful candidate for renomination. He resumed the practice of law, then later he moved to Eureka, Nevada, where he died November 22, 1876. He was interred in the Masonic Cemetery.

Discuss this Jacob K. Shafer biography with the community: